A Touch of The Enchanted Rainforest by Ron Galimam 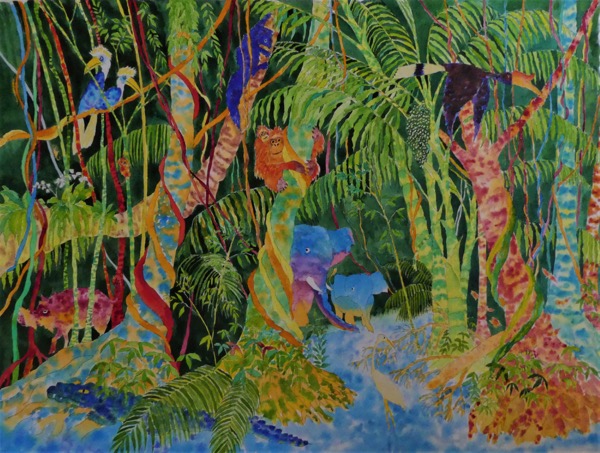 An indigenous Kadazan, Ron was born and raised in Sabah, on the island of Borneo in East Malaysia. He was trained in England and works in a variety of Western mediums but it is in the indigenous medium of batik that renders his style distinctive. Ron uses batik innovatively blurring the lines between tradition and contemporaneity. It is in both Western and Indigenous mediums that A Touch of The Enchanted Rainforest was created, showcasing his ongoing fascination with the rainforest.

“This exhibition is the product of my journey in the Bornean Rainforest centered around the longest river in North Borneo, The Kinabatangan. In this series of works I pay homage to the Bornean Rainforest that is important in our ecosystem but has unfortunately become a battleground between Indigenous tribes, conservationists and oil palm planters. I was very lucky to capture these images vividly in my works because the Bornean Rainforest in Sabah which has an incredible biodiversity is also a tough environment to get around but fortunately there were places accessible to me. I spent a long time at the Tabin Wildlife Reserve that borders with the palm oil plantation and witnessed the wild boars, civet cats, deers and otters crossing from the jungle reserves to the oil palm plantation at night in search of ripe palm oil fruits and the morning shift would be taken over by the elephants and the orangutans. After a tropical downpour at the Danum Valley Conservation area, I came upon a family of Red Leaf Monkeys showing off their antics while carrying their babies and in the evening the majestic Rusa Deers grazed by the giant Dipterocarp trees covered by masses of Tiger Orchids. For more than a year I stayed in Kampong Bilit by the Kinabatangan River where I accompanied local hunters in search of wild boars in the evenings and usually ended up slashing through the impenetrable wall of green and then became a source of food for the zillion of mosquitos but by sunrise I was rewarded by the sight of a Sun Bear with her cub and the ‘old man of the forest’ at a salt lick in the middle of a damp jungle surrounded by lianas and strangling fig trees. In the early morning when the mist cleared, the Kinabatangan River exposed its banks of yellow flowers and the sight of a family of Pygmy Elephants crossing the river was forever etched in my mind. On both sides of the river, groups of Proboscis Monkeys led by their male alphas can be seen cavorting and dozens of macaques grooming above sleeping crocodiles while in the distance Rhinoceros Hornbills can be heard approaching like helicopters scattering away the smaller kingfishers and woodpeckers.They are but a touch of the second largest region of rainforests in the world.” – Ron Galimam