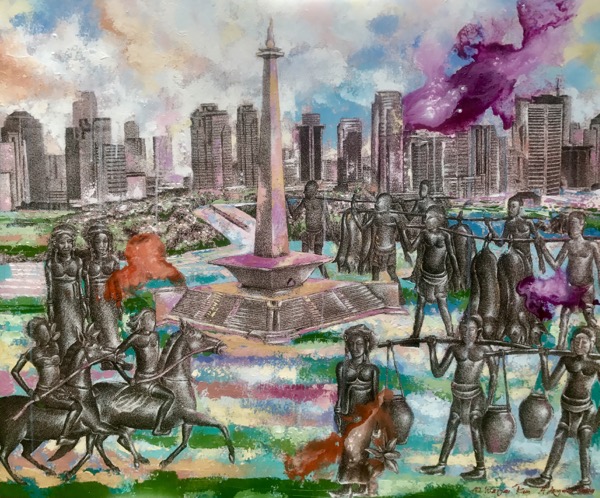 In Santarupa, Balinese artist Wayan Kun Adnyana presents a series of contemporary narrative paintings centered on ancient iconography. He explores figures, forms, and storylines based on the ancient Yeh Pulu relief carvings, a set of primeval images found on a sacred river-bank in central Bali. The creation of these works involves three major approaches: reframing, recasting and globalising the Yeh Pulu reliefs. Thus, his work moves the ancient presence into contemporary global life. The relief carvings are mobilised, drawn and painted into figures and forms to realise theatrical compositions intended by the artist.

“Inspired by new metaphor that was informed by the ancient philosophy of Yeh Pulu reliefs, this series is a revival of narrative in contemporary art. Just like its chronicle that embedded among commoners in Yeh Pulu, my work attempts to connect with common people of multiple narration in our modern world.” – Wayan Kun Adnyana

Curated and to be opened by Prof. Adrian Vickers, Professor of Southeast Asian Studies, The University of Sydney.